How does a processed meat product’s Twitter account give people a sense of “freedom,” “truth” and a “call to humanity” ?? Guest writer, Katie Elson Anderson reports on this surprising and seemingly metamodern phenomenon. It’s extra odd for the two editors of this web site to risk “promoting” a meat company, given that we’re both die-hard vegetarians who would no sooner touch a Steak-umm than snack on a baby’s arm. Being grossed out by the product doesn’t mean we’re not interested to see metamodernism showing up in the darndest places.

The fact that this stuff is being discussed in mainstream news, sans awareness that there exists a term (“metamodernism”) to help account for this sort of phenomenon, is something we are continually tracking. Our thanks to Katie for bringing this to our attention!

In an age of fake news and “fake news,” it may or may not come as any surprise that a voice of honesty and empathy has emerged from the Twitter account of what some might consider fake food: Steak-umm. For those not aware of it as a product before its Twitter feed gained attention this spring, Steak-umm is a brand of thin-sliced frozen beef.

Many of us who grew up in the Philadelphia area are quite familiar with Steak-umms as the primary ingredient of the homemade version of the iconic Philly cheesesteak. Joined by scrapple and pork roll, it often comes up in animated discussions about regional processed meats. Steak-umm seemed long forgotten through the 1990’s and 2000, held only in the freezers of diehard fans and in memories (ranging from endearment to revulsion) of those who grew up with it, until the brand was rejuvenated on Twitter in 2017 as it actively campaigned for verified status on Twitter, which it achieved in early 2018.

For some, including myself, there is a strong nostalgic feeling in reading the Twitter thread which feels both contemporaneously urgent and yet also trifling. Such juxtaposed responses amount to an invocation of the metamodern notion of informed naivety –  an oscillation between the earnest, wistful innocence of youth (these really are Philly cheesesteaks), and the cynical, dissatisfied knowingness of adulthood (these are certainly not authentic Philly cheesesteaks).  Whether they have a preexisting connection to the product or not, people seem to show some strong feelings, watching a brand capture hearts and minds during a time of crisis. The emphasis on feeling states or “individual interiority” that has been identified as a marker for metamodernism helps make sense of this recent Steak Umm phenomenon.

So… what happened and why is it metamodern?

The recent focus on the account’s content started with a set of tweets that spoke to the current coronavirus crisis with respect to fears about misinformation and focused on the notion that “anecdotes are not data”:

The phenomenon of brands attempting to leverage Twitter and popular internet culture has been identified as “brand Twitter.” Much of brand Twitter is filled with cringe and eye-roll-inducing content. There are numerous instances (one example here) of brand accounts jumping onto a meme, engaging in insulting banter with each other while attempting to appear organic and spontaneous. Moreover, there’s often a cynically-staged “earnestness” in a brand’s performed persona – one that fails to ring true in spite of attempted leveraging of memes and other moments of popular culture to create a sense of social solidarity between the brand and followers. Some brands are more successful at this pretense than others. But few are willing to not only admit this pretense but also call attention to it, in order to play overtly with it.

Steak-umm has captured attention (doubling its following in the space of a month) with the unique way it is able to minimize an overt marketing tone, providing commentary on the current situation that displays empathy, compassion and intelligence not typically paired with an anthropomorphized corporate social media account. Additionally, and even more importantly, Steak-umm is transparent about the intentions and consistently reminds the viewer of the primary purpose of a brand account.

The Twitter thread of Steak-umm can be viewed as a metamodern braiding of irony and sincerity (or ironesty) — jumping from earnest advice on the dangers of misinformation and the importance of calling it out, to a playfully self-critical recognition that a propagandic marketing campaign is trying to warn of the dangers of propaganda. And brand Twitter itself (or more properly, the reader’s experience of it) can be viewed as a metamodern phenomenon. That is, readers simultaneously:

Steak-umm’s Twitter account, and consumers’ experience of the product, manage to exemplify metamodernism in their manner of moving between innumerable polarities, which include pessimism, optimism, cynicism, trust, sincerity, irony, misinformation, fact, truth and skepticism.

With articles covering this phenomenon appearing in The Washington Post, Forbes, The Mary Sue, and other publications, the marketing effectively extends outside of the Twittersphere, demonstrating the success of a campaign based on performing authenticity and irony, alongside transparency. One could easily view this with a cynical eye roll and some, such as food writer Brenna Houck in Eater, certainly have: “Could it be that the person at the helm of Steak-umm’s social media accounts is a sad millennial, or is this merely a tactic to sell more steak and swag? Definitely the latter.”

The anthropomorphizing of a social media account that sells processed meat sheets as a voice of reason seems both unreasonable and reasonable at the same time. The year 2020 has turned out to be so bizarre and so dystopian that none of us should really be shocked that the weird flat meat that was a permanent spot in the back of some of our freezers growing up would end up providing us unabashed feelings of hope and inspiration later in our lives. In these strange days everything seems simultaneously unbelievable and somehow plausible.
It is indeed an exceptional moment when, for example, vegetarians and vegans are encouraging their social media followers to follow the account of a meat product.

The sensibility exemplified in the Steak-umm Twitter feed acknowledges the peak irony of a brand using its platform to try to inform the public and inspire unity, while transparently hoping that a positive association attaches to the product, or even brings about a positive social outcome.

Dani Di Placido, author of a (rather cynical, postmodern-inflected) Forbes article on the phenomenon manages to (inadvertently) refer to metamodernism in his observation that “the contrast between a repulsive product with a name like ‘Steak-umm’ and the thoughtful content is all part of the joke, the endless blending of the ironic and the earnest.” In the aforementioned Washington Post article, however, Steak-umm social media manager Nathan Allebach’s comments come off as distinctly metamodern: that the brand has given him “the freedom to dive deeper into…meta commentary and self-awareness.” That deep dive along with his astute understanding of internet culture, and what appears to be a sincere desire to use a platform for good, has perhaps resulted in the first instance of metamodern meat; frozen sheets of processed beef speaking the truth about misinformation and disinformation through its own self-aware propaganda.

You might also enjoy this article on metamodern marketing maven, Oatly: 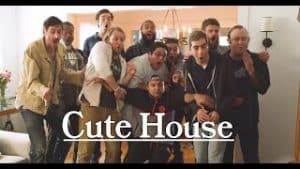 “Is there someone in your life that made you feel like your sh*t wasn’t cute?”
https://www.youtube.com/watch?v=-yXaBunkh4o A WiM reader* turned us on to "Cute House"-- an episode of The Dress Up Gang, which is a… 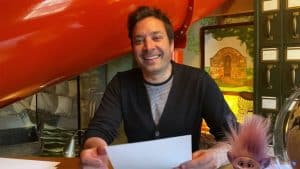 Metamodern Pandemic Late Night: Fallon from the Basement
A Metamodernism Sighting: Jimmy Fallon in the Basement! During this COVID-19 pandemic and social-distancing lockdown, television and film production has…