Here at What is Metamodern? we are in the business of finding exemplars of the metamodern sensibility in the arts and popular culture. One thing we’ve noticed consistently over the years is how “metamodern” has largely been a label that observers of art and culture (like us) have used to describe artworks; but not one that we’ve seen very many artists themselves use to describe their own work. At least not big-name artists. So, imagine our delight when we saw this headline in a Mashable article about the film, Everything Everywhere All At Once, and then upon further investigation, discovered that one of the writer-directors of the film himself used “metamodern” to describe his work.

Everything Everywhere All at Once is the April 2022 box-office surprise from writer-directors Daniel Kwan and Daniel Scheinert (often referred to as “The Daniels” or just “Daniels”) that brings together existential explorations of multiple-reality theory and nihilism, with martial-arts action, comedy, and a touching story about an immigrant family going through a multidimensional, non-linear reckoning in which their shaky bonds are reconsidered. The film is also chock-full of references to other films.

In discussing EEAAO’s intertextuality, Kristy Puchko, author of the aforementioned article, employs the term “poignant postmodernism”; but then Kwan instead identifies “metamodernism” as a more apt description of the controlling epistemic sensibility of his film:

With allusions, there’s a danger that the filmmaker is using a cheap trick to engage their audience, referencing a popular thing the viewer already presumably loves. However, the allusions that Daniels employ — be they references to their casts’ other films, a rampaging Racacoonie, or a DIY Jurassic Park theme — feel personal, like a poignant form of postmodernism. When I posed this to Daniels, Kwan pondered, “I think that’s the version of post-postmodernism that we’re hunting for — that metamodernism, if I’m going to be obnoxious.”

“It’s us trying to grapple with the fact that we are film lovers, who’ve grown up watching so many movies, so much so that we can guess everything that’s going to happen. … Everyone is so savvy. We’re so film-literate that it’s really hard to surprise (the audience). And this film is basically trying to acknowledge that weird thing that’s happening right now, where we are at peak media saturation, peak story saturation. … [But] it’s not about references. It’s more about what is honest and what is personal. I’m so glad that came through and it doesn’t feel like cheap references, because we love all those things we’re referencing.”

What Kwan is talking about sounds a lot like what, in my article, “Eleven Metamodern Methods in the Arts,” I have called Hyper-Self-Reflexivity, a version of intertextual self-reflexivity that goes beyond postmodernism’s penchant for referentiality that might be done simply for the wry, cheeky cleverness of it, and towards a metamodern version that serves the purpose of bringing viewers and characters closer together, via their shared experience of – but also in – that media-saturated world.

Kwan was referring to the film’s intertextuality (or hyper-self-reflexivity) as metamodern. But, that is just one of a number of metamodern elements strongly driving this film, which I’ll enumerate briefly now. Please bear with me as I attempt to make my points in a way that will be meaningful to folks who have seen the film and also those who have not, while keeping spoilers at a minimum.

1. Most obviously, this film braids together multiple tones/moods: silly, cosmic-trippy, intimate, and volatile. As co-director Daniel Scheinert said (in the afore-referenced article by Puchko), “… we’re kind of always trying to just allow ourselves to inject playfulness, even into things we care deeply about.”  A metamodern tonal braiding has the effect of protecting the characters’ interiority from being dissolved by any single one of the braided tones. When you have one dominating tone, the tone can sometimes over-determine or pinch the range of human reactions that would “make sense.” That is, it can become about the tone rather than about what a real person would actually be feeling. The aesthetic benefit of leaning two or more tones against each other, like tent poles in tension, is to prop all of them up, thus creating a “safe” space for the fullness of a person’s felt experience.

To wit, I’ve noticed that a lot of films and television shows that get labeled “metamodern” by metamodernism researchers like me are the same ones that get categorized by critics and journalists (who don’t know from metamodernism) as genre-crossing: as “dramatic comedies” or “comedic horror” or “humorous science fiction.” And we’ve seen a lot more of these cross-genre works during the same years that metamodernism has arisen.

So, let’s see how Wikipedia describes Everything Everywhere All at Once.

When considering EEAAO, one may be tempted to think of it as either a family drama with a weird cosmic extension or as a science fiction story about a cosmic battle over reality with the family stuff just being a cute add-on. I would argue that it’s a metamodern story that requires understanding on both of those levels, while being reducible to neither, nor to something in-between.

2. The film is not simply celebrating being everything, everywhere, all at once – it’s exploring how to live with that multiplied reality humanely. For instance, one significant character is a version of the family’s daughter, Joy, called Jobu Tupaki. She is a master of inter-universe travel, and frequently expresses a point of view that can be seen as either nihilistic or as non-dualist (nondualism=a spiritual perspective associated largely with Asian religious traditions that reflects the idea that – in super-basic terms – we are all one.) Whereas, for most people, nihilism is inflected negatively, non-dualism is a state that many people aspire to. So is Jobu the villain – the cause of all problems in the multi-verse?  Or is she (also?) an avatar leading people to a more advanced state of being? My interpretation of the film is that its project is not to support either of those conclusions about this powerful character, but rather to explore how we can retain our sense of humanity in the face of either or both of them. In other words, regardless of whether we awaken to a kind of scary consciousness in which nothing matters or to a kind of warm and fuzzy one in which everything is connected, the point of the movie is to stare into the face of either of those overwhelming realizations, and ask: where is the place for our sense of individual human-ness? There’s a way in which the very fact that the film seeks to answer that question gives the feeling of a “metamodern spirituality” – that is, a metamodern spin on spiritual questioning. It does not simply wave around the flag of cosmic trip-out and stop there, as a postmodern narrative might. And it also doesn’t insist the viewer arrive at a unified, grand (modernist), reconciliation or save-the-world conclusion.

3. I’m not sure if I can make this metaphor work perfectly, and I admit I may be stretching here to project the epistemic model (the rough delineation of cultural phases in the West into tradition [pre-modernism], modernism, postmodernism and metamodernism) onto the film, but…  Let’s look at that scene in which Evelyn (the mom) is holding Joy/Jobu (her daughter) from falling into the black hole “Everything Bagel,” while Gong Gong (Evelyn’s Dad) holds onto Evelyn and Waymond (Evelyn’s husband) keeps all of them in check. Could we say that each of them represents one of the epistemes?

I’m not going to argue for this correlation too aggressively, but just ponder it, if you wish.

4. The scene where Evelyn and Joy/Joby are rocks in a universe lacking the conditions required for the development of life: This reads like one of the eleven metamodern methods I’ve written about – Overprojection (anthropomorphizing). Here’s how I have explained it:

The projection of human personality onto non-human creatures or inanimate objects can be seen as metamodern in that it is an unabashed, unapologetic showcasing of inner, felt experience. In effect, the author/work/reader is filled up with felt experience to the point where it spills over and imbues itself in non-human entities.

5. A film that tackles representation, without that agenda taking over the film’s meaning. The main protagonist of this science-fiction-comedy-martial-arts-action-adventure is a middle-aged, immigrant, Chinese-American mother/wife who runs a laundromat with her husband and struggles to attend to the needs of their not-entirely-out-of-the-closet lesbian daughter. Not your usual film superhero. In spite of the fact that EEAAO is groundbreaking in terms of diversity/representation, it manages to accomplish that without being only “a movie about representation”; without coming across as preachy (or “social justice warriory” to use the language of certain political subcultures). I think this works for two reasons. A) The film normalizes a family that is not suburban and white by dropping viewers without warning or fanfare into an immigrant Asian-American family experience. So, at least from my perspective as a white viewer, I never felt like I was being pulled in to witness a subculture’s world from the outside; rather I felt like I already was in it – that this was standard, and thus I was free to discover the individuality of the characters, rather than stopping at a story about their group identity. B) The film moves so rapidly between scenarios, points of view, alternate realities, and, as I’ve explained, tones, that there is no time to stop and become preoccupied with one meaning or agenda.

So, once again, is it essentially a drama about a first- and second-generation immigrant family finding their place in a new culture while navigating their daughter’s coming out – one that employs a wacky science fiction metaphor to explore conflicting cultural stances as well as mother-daughter tensions? Or is it a trippy, mind-blowing story about cutting-edge ontological concepts, that includes a touching family tale as a side-bar? You can’t say for sure! It’s metamodern.

Normally when I write one of these pieces arguing that some movie or song, or other artifact of culture is demonstrating metamodern aesthetic sensibilities, I don’t even really imagine that the creator will read it and have some sort of reaction. But in this case… we know that at least Dan Kwan knows about metamodernism and thinks it applies to his film. Where did he come across the term? How would he define it? Would he agree with the points I’ve raised beyond his own statement about the film’s metamodern hyper-self-reflexivity? Did knowing about metamodernism influence his creative process, or was it only an interpretive lens he applied after the work was complete? Daniels – if you’re out there reading this, we’d love to hear from you!

Some favorite quotes from the film:

“The only thing I do know is that we have to be kind. Please, be kind. Especially when we don’t know what’s going on.”  – Waymond

“When I choose to see the good side of things, I’m not being naive. It is strategic and necessary. It’s how I learned to survive through everything.” — Waymond

“Nothing matters.. we can do whatever we want” – Evelyn 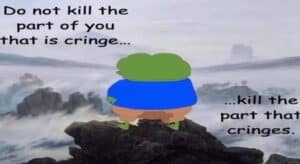